«The force that through the green fuse drives the flower
Drives my green age; that blasts the roots of trees
Is my destroyer.
And I am dumb to tell the crooked rose
My youth is bent by the same wintry fever.»
Top

Re: The Lords of the North

Re: The Lords of the North

Synopsis:
The fourth in the bestselling Alfred series from number one historical novelist, Bernard Cornwell. Our hero, Uhtred, has been made Governor of London. This fourth book in the series will mostly be set in London and will cover Alfred's building of fortified towns to hold Wesssex and his push into Mercia.

From the Inside Flap:
The year is 885 and England is at peace, divided between the Danish kingdom to the North and the Saxon kingdom of Wessex in the south. Uhtred, the dispossessed son of a Northumbrian lord, warrior by instinct, Viking by nature, appears to have settled down. He has land, a wife, two children and a duty given to him by Alfred to hold the frontier on the Thames. But trouble stirs, a dead man has risen and new Vikings have arrived to occupy London. Their dream is to conquer Wessex, and to do it they need Uhtred's help.

Alfred has other ideas. He wants Uhtred to expel the Viking raiders from London. It is a dangerous time and Uhtred must decide how much his oath binds him to the king. Other storm clouds are gathering. Æthelflæd - Alfred's daughter - is now married, but a cruel twist of fate means that her very existence becomes a threat to Alfred's kingdom. It is Uhtred, half Saxon, half Dane, whose uncertain loyalties must now decide England's whole future.

Sword Song tells the story of the making of England and, like all Bernard Cornwell's previous novels, is based on true events. It is a gripping story of love, deceit, and violence, set in an England of tremendous turmoil and strife, yet one galvanised by a small flicker of hope that Alfred, the great king of Wessex, may prove a force that lasts. Uhtred, his greatest warrior, has become his sword, a man feared and respected the length and breadth of the land, his Lord of War.
Rascunhos

Re: As Crónicas Saxónicas / The Saxon Stories - Bernard Cornwell 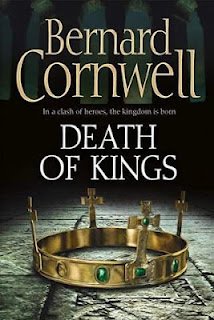 Users browsing this forum: No registered users and 4 guests